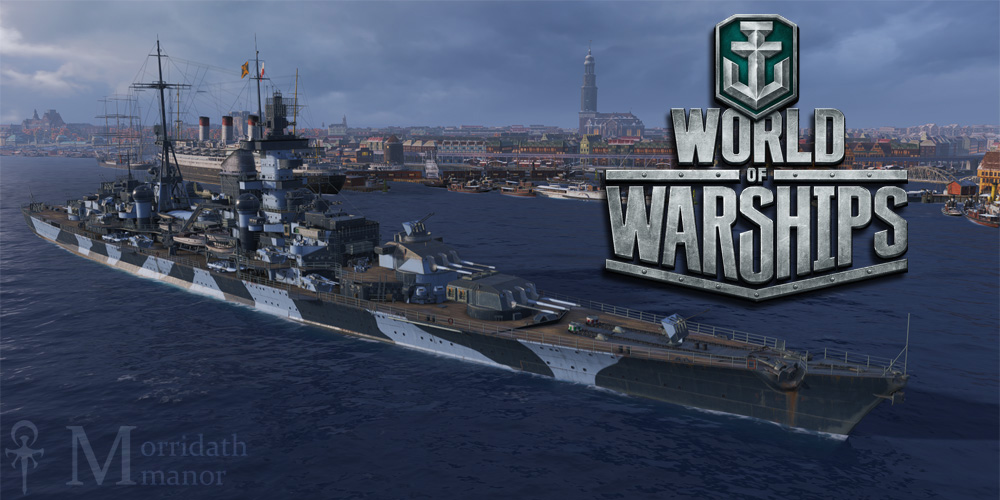 So I play World of Warships sometimes… I’m not very good at it, in fact I can say with all certainty I suck. But it’s fun sometimes, allows me to let off some steam or just get angry at something less serious than the shit going on in real life. It also helps that it’s a pretty game with beautiful floating fortresses of destruction and badassery sending a couple of tons of high explosives towards their enemies with every salvo, even if it gets more and more silly the higher you get in technology tiers.

I got into it by accident to be honest. My line of work inevitably leads to a lot of youtube videos in the background and at some point I discovered the fascinating history of naval warfare in the early 20th century and the terrifyingly enormous tools of destruction called battleships. I mean, I knew them from history, everyone heard about Bismarck or Yamato as superweapons of evil empires during the second world war, but the actual history was, as it usually happens with school classes, skipped. So yeah, first came the interest in history, then in battleships in general and that led to more and more World of Warships replays in my recommended videos. Finally I just clicked that to see what it was all about and… a surprisingly short time later I was taking my first armored cruiser to battle. Now I have well over 50 ships, which in most cases just sit in my port looking pretty, but with a couple of them I can even say I’m almost competent at playing.

I don’t really like the whole community part of it though. I mean some people are cool and I enjoy watching a couple of youtubers/twitchers for the funny clips and sometimes useful info (even if they are assholes sometimes) but the general competitive side, clans and competitions are totally not my thing. Like, I literary play only a couple of ships and very slowly grind tech tree lines and some of the grindable premium ships because I can, but I know I’ll never be playing in ranked battles (or if i will, it will be mostly to check out how it works if they make something silly like 1v1 again). Unfortunately my antisocial nature also causes me a lot of trouble in this game when it comes to clans. I’ve been in a couple and I tried to pull my weight as much as my lousy skills allow, but I could never be too active when I’m surrounded by a bunch of competitive people (lets face it, almost exclusively guys). There are perks of being in a clan and the bigger your clan is, the more perks you get, but to be honest, I’m seriously considering just sitting alone forever or making a one-man clan as a “go away and leave me alone” sign.

I know it’s lame and weird and “why the hell are you even playing a multiplayer game if you don’t like to play with people”, but to be honest, that doesn’t really bother me. I mean, yes, there’s up to 24 people in one match and you’re usually pretty confident at least half of them want to sink your ship, while the other half probably couldn’t care less about you as long as you don’t get in their way. Sometimes someone has a good idea what to do and issue commands which thanks to the GUI are pretty understandable to all (most of the time) and sometimes it’s even me doing that. Most of the time all you need is to pay attention to the map and react. This game is usually slow enough for my derpy reaction time and I learned not to be tunnel-focused on the one target. At least I can at least say that I’m not the reason for the team’s defeat most of the time.

Of course there’s also the part of multiplayer games that sucks, like, you get criticized for every single little mistake and while it’s not the worst offender in this area (I’ve heard horror stories about WoT or LoL) it still sucks when it happens. I mean, sometimes it’s funny, like that one time someone accused me of hacking the game when by simply being lucky I managed to score a blindly fired devastating hit on his squishy little cruiser while in a legendarily inaccurate battleship. Those things happen, every now and then RNG gives you a natural 20. On the other hand when members of your own team keep on criticizing you for following the often forgotten tactics of not getting killed at the start of the game and  “reports” you for it shortly after they themselves get killed in a totally predictable crossfire. That really makes you question why you want to play this game in the first place. Of course the whole reporting part does literally nothing (there is this “karma” counter which really most of the time is just 0 since nobody compliments anyone in this game and everyone just reports each other all the time) but it still makes a part of you hate humanity just a little bit more.

So my way of handling this is to just ignore that others are saying and filter it through “useful/useless” information filter, but that kinda breaks when you have your clanmates in the game with you. Yes, they are there to help, but since the only thing we have in common is that we play this game I find it extremely hard to, you know, care. Don’t get me wrong, I do want to win and I do want to have fun and make fun for others, but “wanting” and “convincingly doing it” are two vastly different things. You might even call it a form of imposer syndrome – I am in a position where other people depend on my competence when I am painfully aware I suck at this game. And on top of that I have to communicate with them. Ugh! I’m in a new clan now, we’ll see how long it’ll take for us to part ways again. At least this time they appear to be a bit more chill and relaxed, but judging by the amount of activity in the voice chat all the time I feel like they will kick me out for inactivity sooner or later with my couple of games per day 😀

Anyway, that was my little rant on a topic completely unrelated to anything else on this website. Take care and if you read this, thank you.