I’ve mentioned that before but in case you’ve missed it, I’m DM-ing a D&D RPG session. If the abbreviations in the later part of the sentence didn’t mean anything to you, RPG means Role Playing Game, D&D means Dungeons and Dragons, one of the frameworks said RPGs can be based on and DM means Dungeon Master – in this case, someone who leads those RPGs. 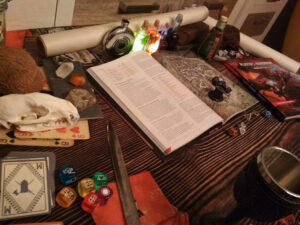 But lets start from the beginning and see where that takes us. The particular world-building exercise I want to describe here started a couple of years back when I offered to create a one-shot RPG session for a couple of friends for a New Year’s eve party. It was simple, had no real mechanics behind it and minimal amount of background setting since we had very limited time and most of the people involved never actually played an RPG before. The idea was that a fantasy  world got magically nuked and a number of survivors camps were built, which later became small town ruled by post-apo warlords. And since there were all sorts of weird mixes of races, since refugees just swarmed into those camps after the disaster which lead to a couple of interesting characters cooing together in the form of young and able “tributes” sent out on a one-way quest to get an impossible Mcguffin because their village warlord wanted to make a point in the standard “rule by fear, do whatever you want” kind of way. They stumbled into ancient ruins, run away form a terrifying creature and bumped into a group of gentlemen undead knights who took them into their not-all-that-creepy castle.

So that went well and by that I mean we had to continue the next day since they had fun and my one-shot grew in scope a little bit. We then had a couple of discord sessions to follow up, but that went about as well as you might think with a large group of people scattered across the country. After some time the whole session idea looked like it was about to just die of natural causes, but due to a weird set of circumstances, events in real life, coincidences and a global pandemic a portion of said group decided it would be cool to continue the story, but lets make it based on D&D instead of “roll dice whenever DM wants to do something”. So I sat down, remapped their character sheets and got a brilliant idea for a fresh start in which those three characters wake up without any memories in a crazy wizard’s lair. That gave me an opportunity to start anew without scrapping the past sessions, although so far only I know how those dots are connected, since the world they woke up in appears to be completely different from the one the players knew and their characters forgot about.

In general this is not how things should go. Players usually make up the backstory for their characters themselves and negotiate with the DM what can happen, what goals they can have and how their backstories play into their campaign. I chose a different path for this campaign because I already knew those characters and we all wanted to reuse them, but at the same time I couldn’t have them remembering the previous setting. With the amnesia angle (I know, how very original) both the characters and players explore the world together, but since they played those characters before, they feel comfortable doing so. And they have a lot to explore in this world. This is not the same place they were before, with a bit of a forest, some ruins and a castle. I made them a whole landmass with a dozen or so countries, a couple of conflicts, a fair bit of criminal underworld and a couple of noble courts to explore. So hopefully I’ll be able to tell you a lot more about this world in the future. I mean I can say a lot about it even now, since the campaign is going strong for well over a year, but I don’t want to slap an unsolicited wall of text in your face.

You can also read this blog on: